A four-player versus game based on Bomberman. Blow up walls to get more and bigger bombs, and blow up the other players to win! 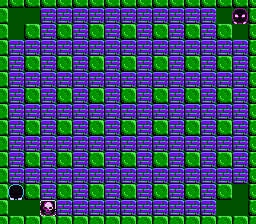 Wrecking Balls is a colaboration between Rahsennor (all the coding) and me (assets).

It’s a competition entry for the NESdev compo of ’16 which just recently passed deadline. The minigame managed to reach alpha stage before submission and is currently developed post-submission. The alpha can currently be downloaded and tested along with the 20 other competition entries over at

There are missing features. Most noteworthy; as of writing this text (17-02-05), the musical assets and sound driver has not yet been included in the game.